Women linked to Tiger Woods – At least he has a better eye for talent than Bill Clinton.

Shashi Tharoor: Why nations should pursue "soft" power – If this is true, please explain to me why chicks always dig the guy who can beat up everyone else.

Surf’s up as biggest waves in five years come to Hawaii after North Pacific storm – Sick.

About Those ‘Tax Cuts for the Rich’ – I guess it's time we start paying our fair share after all. And I'm not rich.

More Regulation to Help the "Underserved"? – If a man was smart he would try to figure out where this will create a bubble, invest there, wait for the bubble to inflate, then get out before it bursts. If I man was smart…

Changes hit home for appraiser – Hooray for regulations! Increased cost to the consumer AND reduced income for the service provider! Yay!

America’s Best Bang-For-The-Buck Cities – Cool…we unwittingly moved form the #22 city on the list to #18. Look how smart we is.

Apple’s Lala Acquisition – I have high hopes for what is possible here, but my hopes for an Android app are diminishing.

An iPhone App to Track How Badly AT&T Sucks – But it works right out of the box. And if it stops working, you can pay someone else to fix it.

Sentinels Of Freedom Golf Ball Drop – Great Idea for a great cause!

The media is once again distorting facts, this time about President Obama making triple bogey while golfing.

Let’s set the record straight. The foursome he was playing in took 19 strokes on the par 4 hole collectively. Once the strokes were redistributed amongst the four gentleman they all scored the hole as a par.

Out of fairness, the remaining three strokes were cut up and distributed to secret service agents, a greens keeper, and a chick driving a beer cart. These strokes will be applied to their next round of golf without penalty provided they are used before November 30, 2009. After that they will go to the public kitty where amateur golfers playing on the nations public courses will be charged with one penalty stroke or pay an 1% luxury tax on their greens fees for the 2010 tax year.

What’s important is that the economy, the climate, and 8 baby seals were all rescued in the process.

When Guys With CLASS Don’t Make the Ladies’ Tee 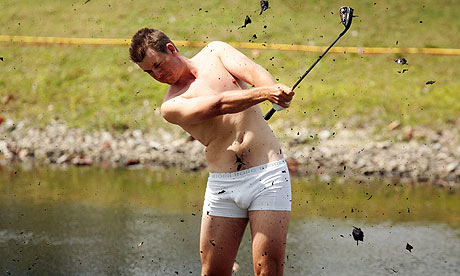 I will one day buy a golf course and do this