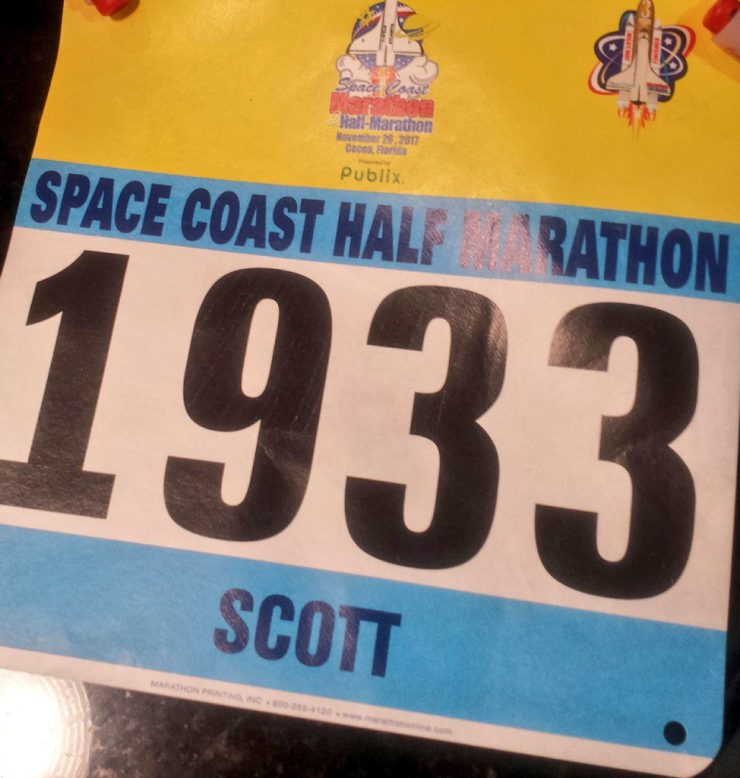 Years and years of training have paid off. I’m happy I still know how to run mentally, even when the physical part isn’t there.

My cardio is really good, but my legs weren’t too happy about being asked to go that far without much run-specific training.

I probably won’t run this race again. And that makes me a little sad.

As always, packet pickup at the Running Zone was a piece of cake. I stopped in the Monday before the race, showed my ID, and was out of there in just a couple of minutes. Race packet included a nice long-sleeved shirt and a Moon Pie. Again, I really wish we could opt for some socks instead of another shirt. And I’d DEFINITELY rather have a pair of socks instead of a medal.

I had a difficult time sleeping the night before the race. I’m not used to having to deal with this. Usually, I’ve put in my time training and trust in it, so I sleep like a baby the night before a race. This time, the longest run I’d done in training was 8 miles (5 weeks ago), and I had not run more than 10 miles since March 2014 (3.5 years). In the month leading up to the race I logged 15 miles total, with only one run longer than 3.2 miles. I knew I could cover 13.1 and run the whole thing, but wouldn’t know what to expect for a race time until I was actually out there.

I didn’t have any trouble getting up at 4:15 and heading to my SIL’s house to get a ride to the race. Luckily we were being dropped off and didn’t have to deal with parking. On the way there I realized I’d forgotten to bring my watch. Ugh…didn’t want to carry my phone, but missing the splits sounded like a worse option (nerd). I decided I’d just carry my phone in my hand and record the race with the Strava app. Not optimal, but whatever. I didn’t have huge expectations anyway.

I also realized I hadn’t eaten anything for breakfast. Hooray for planning.

This was my first time running the half at this event, which starts 30 minutes before the full. In my two times running the full, I really appreciated the fact that the course wasn’t crowded at all.

Not so with the half. Or maybe it was my fault.

I jumped in right after the 10:00/mile pace. I was pretty sure I could do that for the whole race since it was pretty cool outside. I could definitely do 10:00 miles for 7 or 8 miles. Unfortunately, a bunch people who had zero intentions of running anything close to that pace jumped in at the same point. The first mile was a whole lot of running up on to people walking and not having any space to get around them safely because of the crowds. Lots of people running were going at 12:00 plus pace.

This isn’t safe. It’s like getting on the freeway and driving 35 mph.

I hope this doesn’t come off as too whiney. I think it’s awesome that people get up early and go cover this distance, no matter how fast they do it and no matter if they walk or run. And I’m not a snob about running either–I’m well aware that my best day ever running would be an embarrassingly slow day for a whole lot of people.

But please, people, go out with the group that’s running the pace you intend to run.

Corrals with qualifying times for entry would be nice for this race.

So the first mile was much slower than I’d intended. I wasn’t sure what pace it was because I’d decided not to look at pace/time on my phone at all. The biggest reason was that I wasn’t even sure I had enough battery left on my phone to capture the whole thing and turning on the screen would be a battery drain. LOL.

I was eventually able to get to a stable pace. I wasn’t sure exactly how fast I was going, but I was pretty sure I could carry it for 13.1 though (thanks Experience). I started coming up with an off-the-cuff plan. I figured I’d run this pace for the first 8, then increase it a little bit there if I still felt good. If I was still feeling good at 10 mile mark I’d run the last 5k as hard as I could.

Looking back, I’m extremely happy with those splits. I felt really good at the 6 mile mark and had to hold myself back a little bit. I took a very quick cup of water and a cup of Gatorade around mile 7ish and thought I’d be pretty good on liquid for the rest of the race. But it reminded me that I hadn’t eaten breakfast, so I decided I’d get a Gu and sip it for the rest of the race too. Even after speeding up a little for miles 9 and 10 (8:59, 8:42) I still was holding back a bit. I was passing a lot of people, and I knew I’d have a decent 5k left in me at the 10 mile mark.

Course note here: I passed a lot of people who were staying to the extreme right of the courses, even when it curved to the left. Run the apex of curves.

Like I said, I was passing a lot of people during those last 5 miles. Because I’m a nerd I was able to glean from the results that I passed 457 from the 10k point. No one passed me. So I was probably a little too conservative at the start, but that’s the side I’d prefer to err on.

Finish line was awesome again this year–cold wet towels to help cool off, a beach towel with the race logo on it, a nice finisher’s medal, plenty of food and drink without long lines, and a relatively easy time getting to and from the finish line for spectators. Also, the finish line is where you pick up your bonus medal for doing 3 and/or 5 of the last 5 races.

And here’s where we get into the medal discussion/controversy/complaining…whatever you want to call it.

The Running Zone made a very smart marketing move a few years ago when they came up with the idea of giving “super-special” medals for completing the next 5 (or 3 of the 5) races. There’s a segment of people out there who love medals, and the Space Coast Marathon medals are really nice if that’s what you’re into. The result at the end of the five years is that it’s tough to get into the 13.1 distance for this race. I’m not sure if the full sold out.

So now they’ve decided to do ANOTHER special medal program over the next four years with even BIGGER and fancier medals, and they’ll be adding a SECOND half marathon course that is run over the first half of the full marathon course. So now there will be TWO different half marathons and they can take twice as many runners.

If you are into medals, get in on this. They had the new ones on display at the finish area, and the things are HUGE.

The downside for me is that there will be close to twice as many people running.

I get it. This makes economic sense. It’s twice as many people paying entry fees.

But for me, the product they are now selling and the product I want to buy are two different things.

They are selling big fancy medals for completing the distance. What I’ve always been buying is an incredible race experience on a fast course with smaller crowds and manageable race day logistics. I’d pay a higher entry fee to continue enjoying this race that way.

Honestly, I think the fee has always been an incredible bargain.

I’m not really sure what that finishing area is going to look like next year with 3,000 more runners and their families.

I think my best option is to just come out the day before the race and run the course by myself. Or the week before.

Or whenever I want. I’m old enough an ornery enough now that I figure I don’t need someone else to validate for me that the “race” counts.

I’ve already heard people saying, “I don’t want to run the North section of the course.” So I’m sure a bunch of folks will just try run the South course even though they are North registrants, making it more crowded. And adding people to the North section alone means people running the full marathon may have to navigate around these crowds–the South section has usually thinned out by the time the full participants get there.

In short, what I always enjoyed as a small local race is starting to morph into a big race. Nothing wrong with that if that’s what you want to be, just not what I’m looking for.

I think this may be a microcosm where running is headed in general. I think it’s a little bit of a shame when I perceive people running for medals. Let’s face it–these are adult participation trophies for all but a few people [Spoiler–I’m never going to win this or any other race]. And it seems like more and more people are out there with nice gear that lets you know they are “running for wine” or “running for beer” or whatever.

I’d like to see more people out there after suffering through months of training and going out on race day trying to get PRs or complete the distance for the first time. Again, I’m not being a running snob or anything here. It’s not about how fast someone can run, it’s about going through the process and suffering to find out how fast YOU can run.

I know first-hand that really dedicating yourself to running and a difficult training program can have a tremendously positive impact on peoples’ lives.

If you cross the finish line and feel like the only thing you got from the process was a piece of mass-produced metal, you’re missing out on the best of what running has to offer you. That’s my opinion anyway.

Maybe it seems ironic that I’m writing this after running a race without training and missing a golden opportunity to PR.

I get that too.