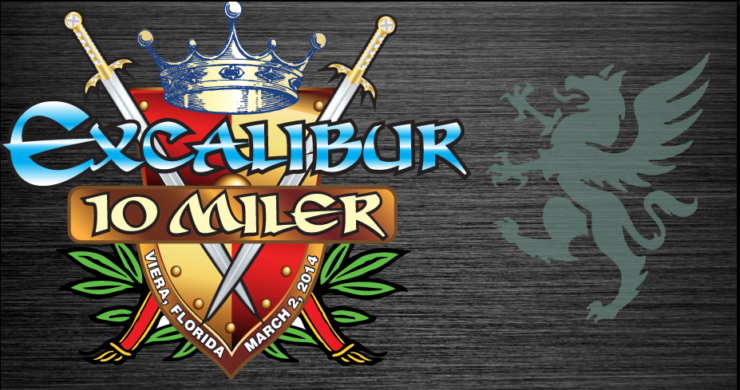 Ran almost as fast as I could have–made a couple of small mistakes that probably cost me some time.

Still would rather have some socks or a credit (maybe $3/race) at Running Zone instead of a medal or crown.

The Villarreal sisters are good at signing up for this race, but I always have to run it. Ok, maybe not always, but every time I’ve run it has been as a fill-in for one of them. Only one sister left to register and then bail on this race. After that, I guess I’ll have to register. To be fair, Lili was medically ineligible this time around and knew that well in advance. The plan was to run with my best Frienemy, El Sueño, and we even trained together for our long runs going into this. Unfortunately, he had to be out of town for a family emergency and I was left to go it alone on race day.

No worries though. Vitamin A brings it for the Main Event!

I think it’s fair to say I trained ok for this race. Not trained optimally, because I’ve only been running once or twice a week–usually a long run of 6-8 miles and then a really slow three miler thrown in there somewhere. Still, we’ve been running at a sub 9:00 pace on our long days and are still able to carry on a conversation, and we’ve done them all on Mondays after my hardest jiu jitsu class of the week on Sundays.

So miles have been low, but I think the intensity I’ve been training with in BJJ (tough 4 minute intervals) combined with actually spending some time on my feet making a running motion had me reasonably trained. I did not want to make the mistake I made in November and come in without much training at all.

As a result, I think I could have run a lot faster and probably PR’d if I’d focused on running for the weeks leading into this race. But I still enjoy training BJJ more, and would have despised running the whole time if I’d been missing out on that.

The reality is that there isn’t enough time in the day for me to do all the training I want, but I’m so fortunate to get to train as much as I do, so no complaints.

I was expecting to push myself and run at an 8:12 pace to get a finishing time of 1:21:59. Realistic, and I could be pretty happy with that.

If you’ve read any of my race reports you know that I don’t hold back my honesty about race organizers. And I’ve never had a bad word to say about the Running Zone’s ability to put on a race. These guys pull it off perfectly every time. Lots of communication and information leading up to their races, everything runs on time, parking and bag check are always easy to navigate, lots of pace groups, etc. Just top notch.

I arrived at Viera High School at around 6:40 and was able to park pretty close to the start line. It seemed like the rush started right after I got there. It was a little chilly, so I held off on checking my bag to maximize my time in warm clothes. I sat down next to the concession stand and just relaxed as people came pouring in.

I was the only person I saw sitting.

This is so weird to me. We’re about to go do something kind of hard that requires us to be on our feet, so I’m going to do everything I can to stay off my feet for as long as I can. But all around me are people milling about, bouncing up and down to stay warm, and even warming up. I mean, I did a short warm up before the race too, but not 45 minutes before the race. My warm up routine isn’t close to that long.

But to each his own–just an observation.

I was planning on doing something similar to what I did the last time I ran this race, which worked out really well. If I could average 8:15 – 8:20 miles for the first two miles I should have enough information to figure out the rest of the race. I was not looking at mile splits on my watch, just monitoring the overall pace. Looking back at the splits later, I did a decent job of running the first two miles according to the plan–8:36 and 8:09. Slower than I wanted on the first one, but no problem making it up on the second.

Making it all up on the second was probably a mistake.

I was feeling good though. I decided to gradually start speeding up and check in with myself at the 5 mile mark. I honestly don’t remember much about what was happening on the course at this point. In fact, I was driving past Space Coast Stadium the other day and realized that I didn’t remember this part of the race at all. I know it was cool out because I wasn’t over heating.

Still feeling good, so speed up just a little and hold it for 3 miles, then turn on the juice for the last two.

Uh-oh. That 7th mile at 7:40 came back to bite me. I don’t remember exactly what happened there, but my best guess is that I’d been putting in some effort on the gravel road portion of the course, which was kind of loose, and when I got back to cement I kept the effort level the same instead of dialing it back and keeping the pace the same. I really would have liked to hold onto that ten seconds for later in the race.

I did my best to go harder in the last two miles (7:42, 7:36) but didn’t have much left to accelerate. I started with a plan to speed up with a mile left, but then bargained for the last half mile, then the last quarter. I think most of the time I saved in the last mile was in the last 200 yards. I wouldn’t call it a “sprint”, but it was all I had. I crossed the finish line, walked a couple of steps, and then had to run again to get to the end of the chute so I could throw up on the grass and not the track.

I probably could have made up some time in the first mile as well. Or by taking a little shorter liquid walk break at mile 6.

But if you’d told me at 6:30 that morning while I was driving there my finish time would be 1:20:xx I’d have been really happy, so no complaints.